In the great splendor enjoyed by Itálica in the time of Adriano, great houses were built in the new city that belonged to the most important and richest families of the area. These houses respect the traditional structure of Roman houses, with their interior patios
Some remains of several of these houses are conserved.

It is built in the time of Adriano. It was one of the mansions destined exclusively for the notables of Itálica with a privileged location, they had   of great quality in the construction and luxury of its finishes. It has a cistern in the basement of the peristyle, where rainwater was stored. A series of rooms and distributors, around the peristyle, facilitated the daily tasks of the lord of the house. One of them is paved with the mosaic that gives the building its name.

House of the Planetarium:

It receives its name from the mosaics that it has in which the planetary divinities that in the Roman calendar name each of the days of the week are seen. It was one of the mansions intended exclusively for italic notables. 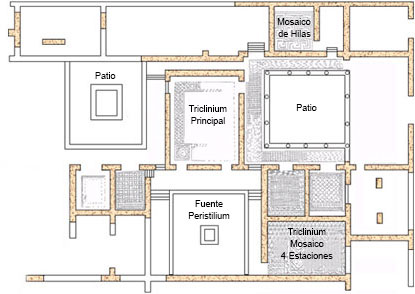 Like the house in the patio Rodio, it is a luxurious house not yet fully excavated. Its name is due to one of its mosaics, in which it is represented the Rape of Hilas by hand of the nymphs -translated to the archaeological museum of Seville.

House of the Exedra:

The exedra is a semicircular construction, usually on a platform with social use for conversation or philosophical dispute ...

Because of the size it occupies, it may be a house or a semi-public building such as a school (headquarters of an association) -4,000 square meters

The rooms in the residential area are distributed around a porticoed or peristyle courtyard, characterized by thick pillars and a central pond with curved shapes. They emphasize the dining room - "triclinio" - and some latrines decorated with mosaics. 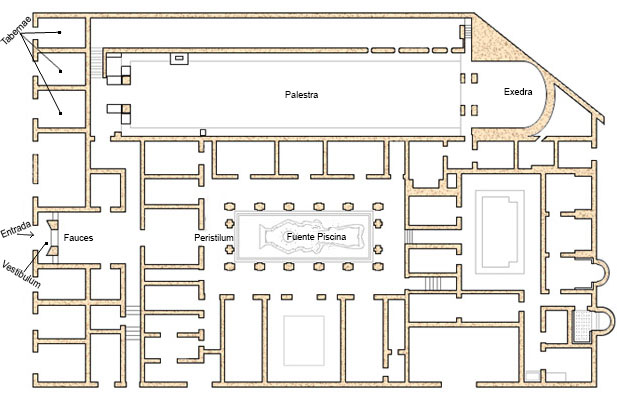 It is another luxurious home, full of mosaics (in this case quite damaged by time and elements), with many unknowns regarding its distribution.

It had its own baths, as well as several important mosaics, mainly that of Neptune, surrounded by marine creatures. It was in use as of the time of Adriano and until the moments in which the abandonment of this zone of the city began. It occupies an apple of 6,000 square meters of surface.